[OUTDATED – It has been a while since I looked at this, so it’s probably very outdated.]

Spoiler alert: I was unable to find a solution to this issue, and ended up deploying a new VCSA instance.

I made the mistake of not assigning a static IP address to my vCenter Server Appliance instance. When I rebooted my router, it was assigned a new IP address. When I attempted to access the vSphere Web Client, I got this:

This actually seems to be at least two errors:

Searching around, I couldn’t find anyone with the exact same issue. The closest I could find was this – the error message is nearly the same, except in my case an actual error number is reported (9127) as opposed to “null”. I also verified that my date/times were synced up properly, so this wasn’t the issue.

Thankfully the VCSA admin interface was still working, presumably because it doesn’t rely on SSO – my VCSA’s root password was all that was needed. In the admin interface, I did notice that the SSO service was indeed not running. 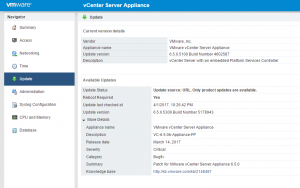 After the update (to 6.5.0.5300 Build Number 5178943), I got basically the same error message while attempting to access the vSphere Web Client, except that it was no longer explicitly complaining about failing to access the SSO server:

The VCSA admin interface confirmed that the SSO service was indeed running. But why was I still getting the 9127 error?

I wish I could say that I found an answer to that question, but in the end I gave up and deployed a new VCSA instance. As I alluded to at the beginning of the post, I suspect this was caused by the VCSA IP address changing, leading to the SSO certificate(s) being invalidated, but I’m not sure. Hopefully I can save someone else the hassle of trying in vain to find a solution. Or even better, maybe someone can tell me how I could have fixed it…