BitBucket repository is live: https://bitbucket.org/MostThingsWeb/usbdrumming/src
In the final post in this five part series, I’ll develop a client side application in Python to communicate with our drumset which was modified in part 4.

The final result will be a simple command line interface (for now) that looks like this: 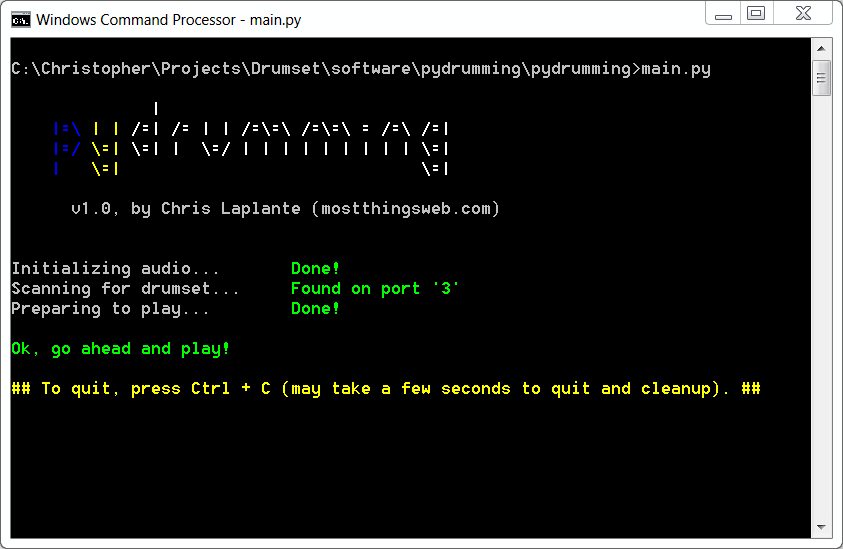 Before even choosing the language I wanted to use, I decided to list a few requirements for the client-side software.

I ended up developing this application three times: twice in C# and once in Python. There was also almost a C++ version. In this section, I’ll explain the initial prototype versions and why I decided upon Python in the end. To do this, I’ll go down the list of the requirements.

Requirement 1 is easy: if you remember, back in part 3 we added a feature to the embedded software that supports responding to “pings”:

I didn’t want users to have to figure out which serial port to use. It should Just Work™. This is a very simple feature to implement, and because of this, requirement 1 didn’t actually steer me towards any one language.

With no specific language in mind, I ended up first building this application in C#. My first attempt was to use MIDI synthesis (via the midi-dot-net project). The application worked, but it was very laggy. Also, the MIDI cymbals sucked. This first try taught me to be weary of MIDI synthesis; although I wasn’t using a brand new computer, I couldn’t imagine how it could be so slow to render a snare sound. From then on, I decided on prerendering each instrument sound. I feel like this was a good choice, because as you will see, the final product has barely any lag at all. I also wasn’t completely sure if I could reliably do MIDI synthesis cross-platform (and in a way that would allow users of lower end computers to join in on the fun).

How did I prerender those drum sounds? Very simple: by enslaving iTunes. iTunes exposes a very niceCOM API which I make use of to perform MIDI to wav conversions. MIDI files are first generated by the C# MIDI Toolkit. The code (below) is very simple but hackish. You can check out this code on BitBucket, under /dev_tools/MidiRecorder (no guarantees that it will work for you, though. I just put it up for completeness).

I exclude MIDI instruments #s 49, 52, 55, and 57 because those are cymbals (which, again, suck). Those four instrument sounds were taken from the NAudio project (and given proper attribution in the BitBucket repository).

Next, I revisited using C# by incorporating my new prerendered instrument sounds. You can access attempt #2 at on BitBucket, under /dev_tools/USBDrumming Console. Here is a snippet of the application:

This was a very hackish solution (as evidenced by the terrible variable names and lazy file locations), and it almost worked. The problem? Requirement 2. SoundPlayer doesn’t support sound mixing, so the end result sounded very unrealistic. For example, if you hit a cymbal and then immediately hit the snare, the cymbal sound would be interrupted before it completed. I couldn’t find a single C# library that supported multi-channel audio or a way to interop to such a library in a cross-platform manner, so I abandoned C# altogether

I can’t really call this attempt #3, since I never actually wrote the application, but I did consider using C++. Specifically, the openFrameworks project seemed very attractive to me. Plans to implement the application in C++ were complicated by the fact that I couldn’t get openFrameworks working. For various reasons, C++ was ruled out.

If you read the first sentence of this post, you’ll know that this attempt was destined to work. So how does Python solve our two remaining requirements (#2 and #3)?

Four thrid-party Python modules are used by the application:

I used setuptools/disutils to manage these modules, so if you’re on Linux or OSX, these three modules will be automatically installed when you invoke setup.py install. On Windows, you need to first install pygame manually (because automatic installation of that module on Windows doesn’t work for some reason), and then invoke setup.py install to install the remaining two modules.

I’m just going to talk about the important parts of the application, beginning with configuring pygame for multi-channel audio mixing.

Like the comment says, you might need to play with the arguments of pygame.mixer.init or the number of channels to see what works with your computer. wav_directory is a global variable. Each drumpad hit will result in playing its corresponding sound on a new channel. In the case of hitting multiple pads really fast successively, that could result in many channels being used. I chose 16 for this reason, but you might need to increase it depending on how fast you can drum.

Let’s make use of this ping feature that I keep talking about.

First we check that any serial ports exist at all. If there are, then we ping each one and wait for a response. The test_port function is defined as follows:

The final important piece of the puzzle is actually responding to pad hits.

Instruments 46 and 49 are treated specially because those are the hihats. We only want to hear each hihat “playing” at most once, so we store the sound object for each hihat and interrupt already-playing sounds when a hit is detected. The other pads don’t need this treatment because the sounds they “play” are so short that it’s not likely for anyone but a trained musician to perceive too many “drum sounds” playing at once.

Check out the full Python application on BitBucket, under /software/pydrumming.

Installing and using the application

These steps assume that you already have Python 2.x installed (I developed on 2.7), and that you’ve cloned or downloaded the latest BitBucket repository. Follow these steps:

The pydrumming binary is what you should run whenever you want to use the application.

Pretty simple. Plug in the drumset to your USB port, and run the application.

My drumset is found, but the RBG LED flashes bloody murder and/or random drum sounds are playing even when I don’t hit pads:
Follow this troubleshooting checklist:

Error: No serial ports detected…: You didn’t install the Pro Micro driver correctly, or you didn’t plug in a drumset.
Error: One or more serial devices were detected, but did not respond to the ping…: You probably have other serial devices connected, but the Pro Micro drivers are still not installed correctly.
Warning! Pygame is not installed…: You’re running Windows but didn’t install pygame before running setup.py.
Some other error message:: You didn’t install something correctly (e.g. Python, pygame, setuptools, your window treatments, etc.)

There are a couple of things that I wish I had done differently or that I didn’t do because of time constraints:

I hope you enjoyed this series of posts as much as I enjoyed working on this project. Thanks for reading along! If anyone follows along with the guide, please let me know in the comments below. And of course, if you make any modifications or improvements to any aspect of the project, please share them with me on BitBucket.

2 thoughts on “Hack a Guitar Hero drumset to use it with any computer over USB, Part 5”