After researching various Arduinos and Arduino-compatible boards, I decided on the Pro Micro 3.3V from SparkFun, pictured below. I chose this board for its small size and relative low cost ($24.95).

I’ll walk you through all the things I tried in my quest to get the Pro Micro to talk to the drumset. I’ll explain along the way why my initial attempts didn’t work. Note that from here on, the Pro Micro is referred to as the Arduino.

Just connect the drumset SPI bus to the Arduino SPI pins. I chose pin 2 to be CS.

Take note of the Schottky diodes. We want to prevent the Arduino from powering the control box, and vice versa. However, the drumpad controller needs to be powered either way. I accomplish this with a diode on the Arduino and control box power pins. Schottky diodes were chosen for their low voltage drop; we don’t want to under-power anything.

The Schottky diodes were probably the only thing I got right on this design – we’ll use them in every future revision.

The first issue is obviously problematic. The second issue, however, is a little more subtle. You might be thinking, who cares if the Arduino is being powered? That was my stance too, until I realized the implications. First, having the Arduino powered 24/7, even with the control box off and USB cable unplugged, will drain the batteries faster than normal. Second, it’s actually dangerous to apply an overvoltage to any pin for too long – you’ll damage your Arduino.

For my next attempt, I tried using diodes to solve the two problems I detailed above. Isolating the pins with diodes should (a) prevent the drumpad controller from seeing the Arduino as a load and (b) prevent reverse current flow into the Arduino when the Arduino is off. Below is the modified circuit. Nothing has changed except the addition of D3, D4, and D5. These are just standard small signal diodes. 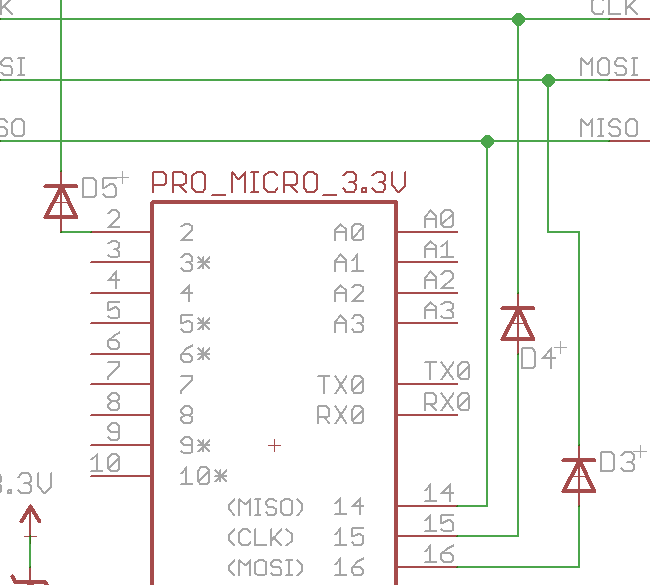 There is no need to protect MISO with a diode, since that line is being driven by the drumpad controller.

If I remember correctly, this solved problem 1: The Arduino was effectively isolated from the rest of the bus when it was off. However, problem 2 still plagued the circuit. Even with diodes, there existed enough potential to cause reverse current flow. By the way, I tried disconnecting the MISO line, but the problem still occurred.

My third attempt involved using diodes to clamp the SPI lines to the Arduino’s Vcc, similar to the circuit here: http://electronics.stackexchange.com/a/22773/2473. This didn’t solve either problem.

Fifth attempt: The magic of tri-stating!

Enter the 74126, a magical little 74xx series tri-stating non-inverting buffer. The model that I used to prototype (on my breadboard) is the SN74AHC126N. Great chips to have around. 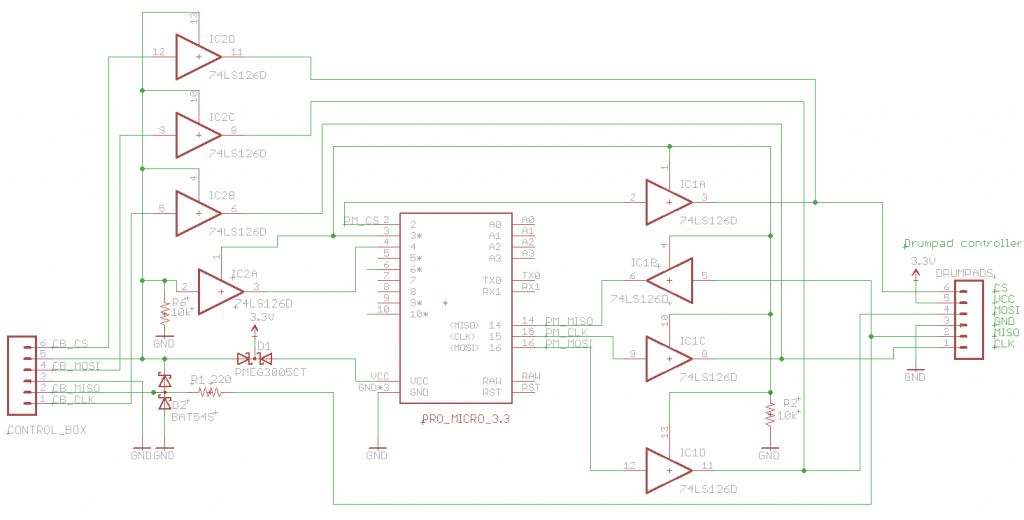 Click for a bigger version – I’ll apologize in advance, because the layout is not the best it could be.

There are four buffers on the right which interface the Arduino to the drumpad controller. The three on the left (excluding IC2A) interface the control box to the drumpad controller (IC2A is used for a different purpose, described in the next post). On each chip, pins 1, 4, 10, and 13 are the output enable lines. When low, this line puts each buffer output into a high impedance state, essentially removing the buffer from the circuit.

Similarly, the top three buffers on the left connect the control box to the drumpad controller. The OE lines are configured so that the buffers switch to high-impedance mode when the control box is off. The MISO line on the control box defied my attempts to be buffered, so instead I opted to use a circuit protection technique I found here. Conveniently, I’ve found a use for the fourth buffer that I’ll reveal in the next post.

I’ll post and briefly explain the test sketch I ran on the Arduino.

If you are following along (I guess you just had all those parts laying around?), and want to run the sketch on your Pro Micro, then you’ll need to follow these steps to prepare your computer. If you are using some other microcontroller or Arduino, then you are on your own.

Here’s the code. Everything should be self-explanatory, except for the “Initialize drumset” part. I found that the control box sends a command to the drumpad controller to initialize it before polling for pad hits. That’s what those lines do.

In part 3, I will refine the drumset interface circuit and embedded software.

4 thoughts on “Hack a Guitar Hero drumset to use it with any computer over USB, Part 2”